In Spanish, verbs are classified into three types.

With regular verbs in Spanish, only the ending part of that verb (the -ar, -er or -ir part) changes depending on who does the action. However, unlike English, there is a different ending for each subject (pronoun).

To begin, we will show you how to conjugate the verb in the present tense: 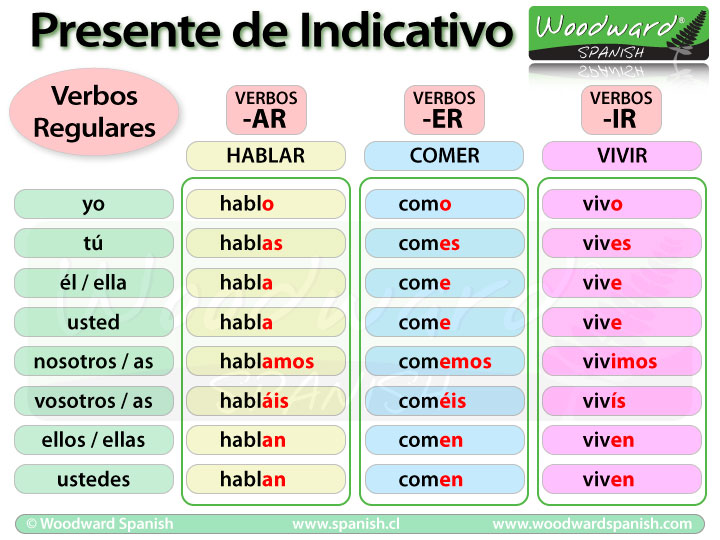 Before you continue reading, make sure you know about Subject Pronouns in Spanish (yo, tú, él etc.).

If you have the verb Hablar (to speak) and you want to say "I speak". You just remove the last two letters of the verb (in this case remove the -ar) and add the letter -O to the end to create the conjugated verb Hablo which means "I speak".

Another example: if you want to say "They eat", we take the original verb, in this case Comer, we remove the ending (-er) and then add -EN to the end (because ellos = they). We now have Comen (they eat).

You will notice that certain verb endings are repeated. For example for YO (I) we take off the ending for all regular verbs and add the -O to the root (main part) of the verb.

Also see how the only difference between -ER verbs and -IR verb endings is when we use nosotros (we) and vosotros (you/plural/informal).

The subject pronoun (yo, tú, nosotros etc.) is often omitted before the verb since we normally know who the subject (the person doing the action) is because of the verb's ending.

The following verbs are only irregular in the first person (singular). The rest of the conjugations are as normal (see regular verbs above).

The following verbs are a part of this group: Estar (to be) - Dar (to give)

Verbs that end in -cir and -cer change to -zco in first person. The following verbs are a part of this group: Conducir (to drive) - Conocer (to know) - Traducir (to translate)

Remember these verbs are only irregular in the first person (singular), the rest of the verb has the same rules as regular present tense conjugations.

Spanish Verbs that have Stem Changes

There are four types of verbs where the stem of the verb is irregular and changes. In the present tense these are verbs that change their stem from O to UE, from U to UE, E to IE, and E to I. Note that this stem change does not happen when the verb is for nosotros o vosotros (these maintain the original stem of the verb).

I.- Stem changes from O to UE

The letter "O" in the stem of the infinitive verb changes to "UE" in the conjugations.

The letter "E" in the stem of the infinitive verb changes to "IE" in the conjugations.

III.- Stem changes from E to I

The letter "E" in the stem of the infinitive verb changes to "I" in the conjugations.

IV.- Stem changes from U to UE

The letter "U" in the stem of the infinitive verb changes to "UE" in the conjugations. Note that the verb Jugar is the only verb that is irregular in this way.

Try our interactive games to practice the present tense in Spanish:

For Teachers and Parents 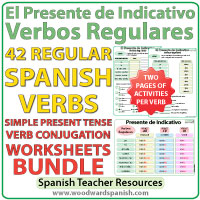 If you found this guide about the Spanish Present Tense interesting or useful, let others know about it:

In Spanish, verbs are divided into three categories for all tenses: -ar verbs, -er verbs, and -ir verbs. The -ar, -er, and -ir refer to the unconjugated infinitive ending of the verb. Examples of each are hablar(to speak), comer(to eat), and vivir(to live). Verbs are classified in this manner because each type has its own conjugation pattern. In this display, -ar present tense verb conjugations are the focus.

In the table above hablar is divided by its stem habl- and its conjugation ending, which changes with the subject. To conjugate any regular -ar verb, remove the -ar to find the verb stem, then add the proper ending.

Attention:
The verb conjugations for Ud., él, and ella are the same. Also, Uds., ellos, and ellas have the same conjugation ending. This is true for all verbs in all tenses.

Attention:
The verb endings indicate who is doing the action, so often the subject pronouns are omitted. However, they can be used at any time, especially for emphasis or clarification.

It is also important to keep in mind that in English there are more ways to express an action in the present than in Spanish. For example:

Regular verbs (we'll leave the irregular verbs for later) follow the same pattern as other verbs with which they share endings. The root of the verb (the part up until the -ar, -er or -ir) stays the same, while the ending is replaced according to the subject.

The root for SALTAR is "salt-" and the root for AMAR is "am-". See how the endings change:

The root for VIVIR is "viv-" and the root for SUBIR is "sub-". See how the endings change:

Spanish Verbs that End in -ar

All Spanish verbs end in either -ar, -er, or -ir. Each of these verb categories has specific rules governing how they change to express layers of crucial information about the situation. Verbs that end in -ar are the most common, so memorizing their conjugations are a great place to start.

The form of a verb changes to show who perpetrated the action (“the person”) and when it occurred (“the tense”). Spanish uses one extra “person” category that corresponds to addressing “you all / you guys” in English. For more on the different person categories and personal pronouns in Spanish, see this guide.

Though native speakers may not notice it, English verbs also change depending on who performed the action and when it occurred. Most verbs only change in the third person singular (see below) in English, but all verbs change to distinguish when something occurs.

In most cases (apart from irregular verbs), the English past tense is formed by adding -ed to the word. Both English and Spanish have a lot of irregular verbs which simply need to be memorized, but learning the rule for regular verbs makes conjugation much easier.

Being exposed to verbs in context (rather than just in a chart) is also crucial to becoming comfortable using them – not to mention it’s more fun! Use Lingvist’s Spanish course to see verbs in context, as well as look over grammar tips to clarify concepts explicitly as needed.

To Infinitivo and Beyond

The infinitive (infinitivo) form of a verb is its most basic form. You can spot them easily in Spanish because they retain their original ending of -ar, -ir, or -er. The equivalent meaning in English is the same as “to [verb],” so “amar” translates to “to love.”

Except when stacking two verbs together (“I [like] [to help]” / “Me [gusta] [ayudar]”), the infinitive form needs to change to express the who and when. This is where conjugation comes in.

For regular verbs, the infinitive lends its stem to its conjugated forms in a predictable way. The stem, or raíz (literally “root” in Spanish), is the part that occurs before the -ar, -ir, or -er.

Simply put, to conjugate an -ar verb, drop the -ar and add the appropriate ending according to the person and tense.

For example, in the present tense you add -o, -as, -a, -amos, -áis, or -an to the remaining stem after removing -ar. You’ll see an exception to this rule in the simple future, where you only need to add the ending to the intact infinitive.

To talk about something being done presently, drop the -ar and add one of these endings. English often uses the present continuous (example below with hablar) instead of the simple present, so you’ll end up using the simple present a lot more often in Spanish than you do in English. In English, the simple present often has an implied regularity or habitual connotation to it. This is not the case with the Spanish simple present.

Use the imperfect (pretérito imperfecto) to talk about actions that were habitual in the past or lacked a defined end, e.g., “Trabajaba todos los días, hasta que me lesioné el pie.”

The preterite refers to an action that has been completed in the past. In English this is what we generally think of when we think of past tense, as in the sentence “I opened the box.” For more on how to use the Spanish preterite, see this guide.

For the future tense you simply add the ending to the full infinitive (Note that these endings are the same for all three categories of verbs).

Many of the most common -ar verbs are irregular. These conjugations do not follow the patterns listed above, though there are some patterns in the ways that they differ, which you can read more about here. Be aware that the above conjugations won’t apply to these verbs. A few examples of common irregular verbs are:

For a list of the most common -ar verbs and their conjugations, click here. Irregular verbs are highlighted in red in this list. For an example of how an irregular verb can differ, see the conjugation chart for the verb estar below.

States of “Being” in Spanish: Estar vs. Ser

Estar, one of the most common verbs in Spanish, means “to be.” Spanish has two verbs that correlate to the translation of “to be” in English: estar and ser. Estar is used to talk about temporary states of being, such as health or locations. Ser is used to describe more permanent attributes, such as characteristics of a person (tall/short), occupations, or where someone is from.

Being able to judge which verb is appropriate will come with more exposure to these verbs in context, which is why it’s important to expose yourself to full sentences or longer texts in Spanish whenever possible. See this page for how to use ser and estar in descriptions, and this guide on specific uses.

Note that all forms of estar begin with “est-”.

Simple present tense is irregular in all forms except nosotros and vosotros:

Imperfect tense is only irregular in vosotros:

Preterite tense requires a stem change from est- to estu-:

Simple future tense is not irregular:

Posted by LEAF Architect on Sunday, July 8, · Leave a Comment